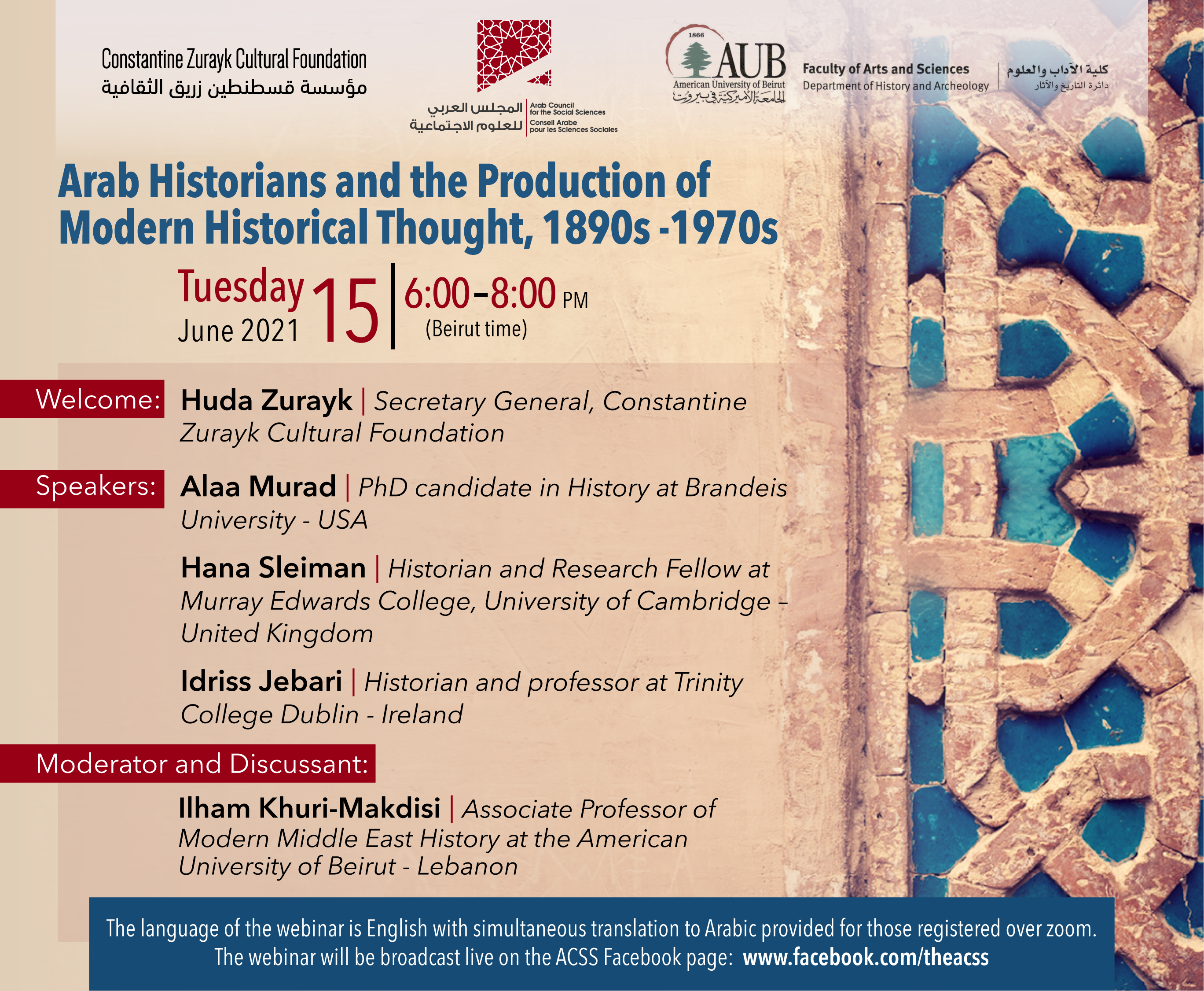 The Constantine Zurayk Cultural Foundation* in collaboration with the Arab Council for the Social Sciences and the AUB Department of History and Archeology invite you to an  exploration of the genealogy and transmission of modern historical thinking across three nodes and periods. Beginning in late nineteenth-century Egypt, passing through early twentieth-century Lebanon and ending in late twentieth-century Morocco, this panel examines the iterative process through which Arab historicism was produced and refined as well as begin a mapping of the  transhistorical Arab intellectual history that loosens the grip of ruptures and allows tracing those paradigms, practices and problematics that passed on from one stage to the next.

Beginning with Jurji Zaydan’s historical novels (1891-1914) exploring his reconstitution of the Islamic past into a universal history, and the subsequent production of particular political and social imaginaries that resonate until today. Moving on to Constantine Zurayk’s historical thought (1930s-1950s), tracing his methodological and theoretical interventions that helped define modern history as a category of knowledge and the modern historian as its guardian. Ending with an examination of Maghribi thinkers’ engagement with historicism in the 1970s in light of colonialism’s lasting legacies on the one hand and the circulation of ideas between Arabs on the other.

Ilham Khuri-Makdisi is an Associate Professor of Modern Middle East History at the American University of Beirut (AUB). She specializes in the history of the Arab Provinces during the Late Ottoman Period.

Alaa Murad is a PhD candidate in History at Brandeis University. Her current research focuses on the reappropriation of classical and medieval Islamic texts in the writing of nineteenth-century history. Her dissertation focuses specifically on Jurji Zaydan's historical novels as didactic tools of storytelling that redefined Islamic and world history.

Hana Sleiman is ahistorian of the modern Middle East, writing on Arab intellectual history and the history of print. She is a Research Fellow at Murray Edwards College, University of Cambridge, and serves on the International Advisory Panel for the British Library’s Endangered Archives Programme.

Idriss Jebari is a historian of the modern Middle East who writes on the cultural and intellectual history of North Africa and Arab thought. He teaches at Trinity College Dublin in Ireland after having held research positions at the University of Oxford, the American University in Beirut and Bowdoin College.

The language of the webinar is English with simultaneous translation to Arabic provided for those registered over zoom.

The webinar will also be broadcast live on the ACSS Facebook page.

*The Constantine Zurayk Cultural Foundation was established in 2002 in Beirut to support researchers and PhD students in their research, to organize scientific meetings, and to grant awards to scholars in the humanities and social sciences. Its community of outreach is mainly researchers and scholars in the Arab region who are working within areas of intellectual concern for Constantine Zurayk (1909 – 2000).