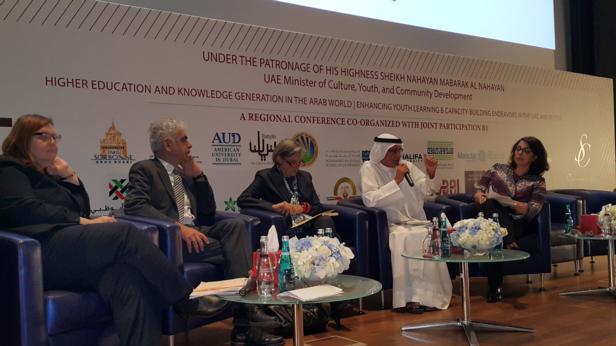 Under the patronage and with the presence of His Highness Sheikh Nahyan Mabarak Al Nahyan, UAE Minister of Culture, Youth, and Community Development, the Arab Knowledge Forum, entitled "Higher Education and Knowledge Generation in the Arab World: Enhancing Youth Learning & Capacity-Building in the UAE and Beyond," took place on November 18, 2015 at Dubai Healthcare City.
During the Forum, the Arab Council for the Social Sciences (ACSS) organized a session entitled "New Knowledge for New Times," with the participation of ACSS Director General, Dr. Seteney Shami, ACSS Trustee, Dr. Abdulkhaleq Abdulla, Dr. Moushira Elgeziri from Ford Foundation - Cairo Office, American University in Cairo (AUC) President, Dr. Lisa Anderson, and Dr. Mohammed Bamyeh, author of the first report to be published by the Arab Social Science Monitor (ASSM).
Given that it was the first time the ACSS takes part in such an event in the Emirates, Dr. Shami gave a quick overview of the ACSS and its work, focusing on its youth-targeted projects.
Dr. Shami talked about the ACSS pilot program targeting high school students and undergraduates in their first or second year of university in selected countries of the Arab region, to introduce them to the social sciences and to raise an awareness and understanding of possible career options in the various social science disciplines.
Dr. Bamyeh introduced the Arab Social Science Monitor (ASSM), one of the main projects of the ACSS, which is an observatory dedicated to surveying the landscape and assessing the trajectory of social science research in Arab countries as well as following up on emergent research agendas and themes.
Dr. Bamyeh also presented some reflections and recommendations from the first Arab Social Science Report, which he wrote.
"We need to focus on social sciences in the Arab world," said ACSS Trustee, Dr. Abdulklaleq Abdulla, "because they help us understand the events that took place over the past few years and that are still happening today."
Dr. Moushira Elgeziri stressed on the importance of the knowledge coming out of the ASSM. "The first ASSR is a precious piece of intellignce as it helps us understand the present and efficiently plan for the future," she said.
Dr. Lisa Anderson echoed her sentiments. "The ASSM provides the kind of evidence that is necessary to move from theory to actual testing, and to creating the necessary positive change in societies," she said.
The first ASSR on the forms of presence of social sciences in the Arab region will be published later this year by the ASSM.