Symposium on Modern Heritage in the Arab World 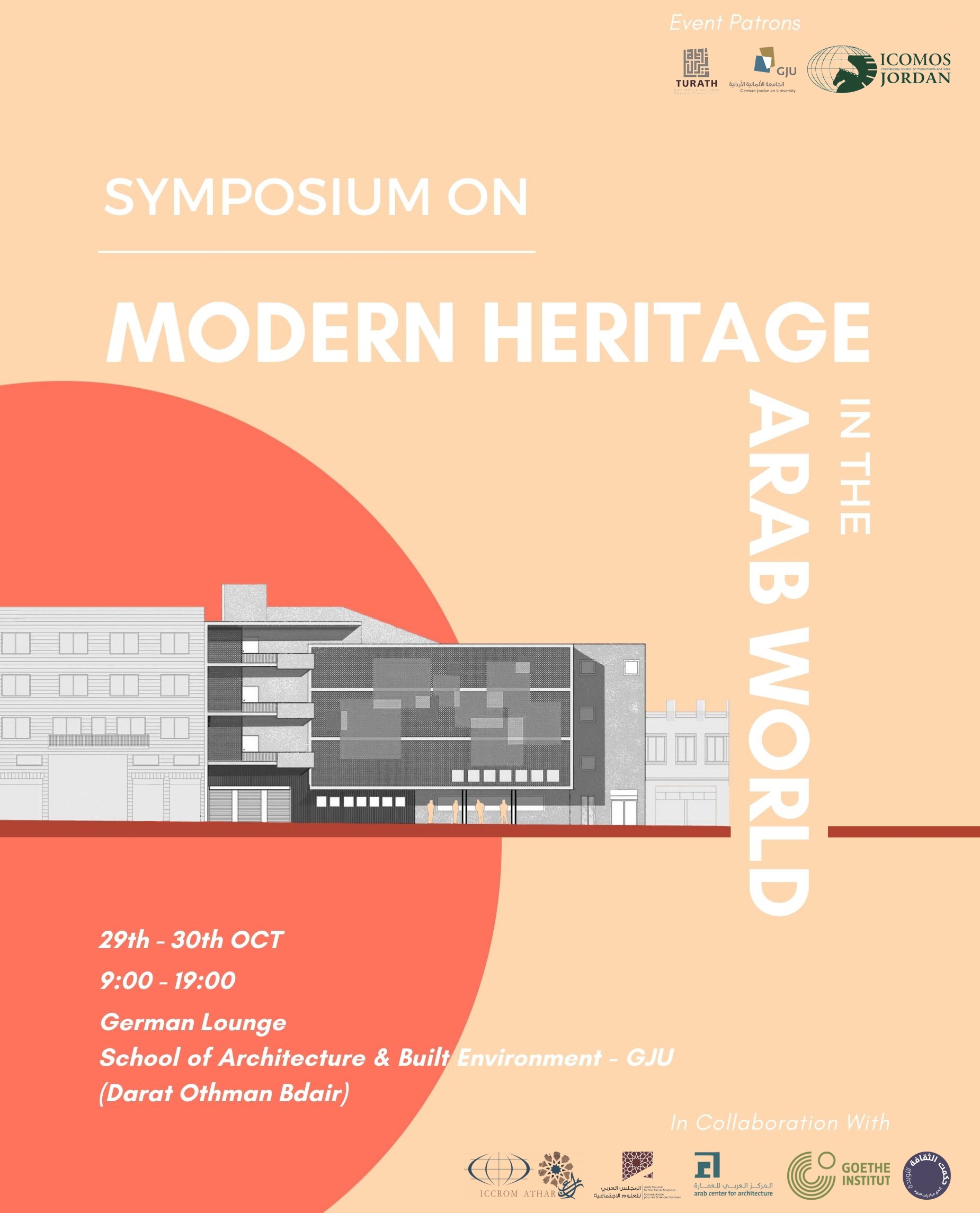 The School of Architecture and Built Environment (SABE) of the German Jordanian University (GJU) together with ICOMOS Jordan (International Council on Monuments and Sites of Jordan) are organizing a regional symposium on Modern heritage in the Arab World to be held at the School of Architecture (DARAT OTHMAN BDAIR) in Amman and on line during (October 29-30 2022).
This symposium attempts to grant voice to this segment of Arab heritage by focusing on the meaning and essence of the Modern movement; as a major project of cultural change that the whole World had gone through at the turn of the 20th Century with filtrations into the Arab states at different periods. The symposium attempts to investigate the impact of that period/heritage as agents of change and transformation in the Arab World while emphasizing the need to reflect on that heritage and to incorporate it, at least at the level of understanding and critical evaluation, as part of general progression of Arab thought and culture.

The Modern movement as a Project of political, socio-cultural, and technological change

Influences and precedents of Modern architecture in the Arab world

Jad Tabet: Modern Heritage in The Arab World in The Light of UNESCO World Heritage Convention

Dr. Mazen Haider: Reception And Appropriation Practices Of “Modern” Residential Buildings in Beirut Between 1946 And 1990

The Modern Movement and The Arab City

The Modern Movement as A Project of Political, Socio-Cultural, and Technological Change

The Conservation and Continuity of Arab Modern Heritage Physically and Ideologically

The Conservation and Continuity of Arab Modern Heritage Physically and Ideologically

Dr. George Arbid: The Arab Center for Architecture in Beirut

Abdul-Halim Jabr: Tripoli: Between the Citadel and the Fair

The Modern movement as a Project of political, socio-cultural, and technological change

Researching and archiving the Modern movement:  sources for the study of Arab history

Nationalism and the Modern project in the Arab world.

The Colonial effect, the colonial project, and post-colonial critique

Dr. Renate Dieterich: “The City Is So Beautiful Up There ….” Sidi Bou Said and The Winding Paths of Cultural Heritage in Tunisia

**Please fill the form in order to be able to attend the Symposium both On-Campus & Online.

This event is in collaboration with other well-reputed research institutions including:

*ICCOROM-ATHAR: A regional conservation center founded by ICCROM (International Centre for the Study of the Preservation and Restoration of Cultural Property), and the Government of the UAE/ Emirate of Sharjah.

*Goethe-Institut Jordanien: Based in Amman, Jordan, Goethe is the cultural institute of the Federal Republic of Germany that operates worldwide. They promote knowledge of the German language abroad and cultivate international cultural cooperation.

*Hikmat Culture: It is one of the initiatives of the Al Joud Foundation, which cooperates and works with everyone to emphasize the value of Jabal Al Weibdeh as the first destination for culture and creativity in Amman. The program of the Hikmat Culture initiative includes multiple aspects of arts, including: Theater Arts, Photography, Visual Arts, Performing arts, Creative Writing, Music, as well as Research, Training and Event Management.