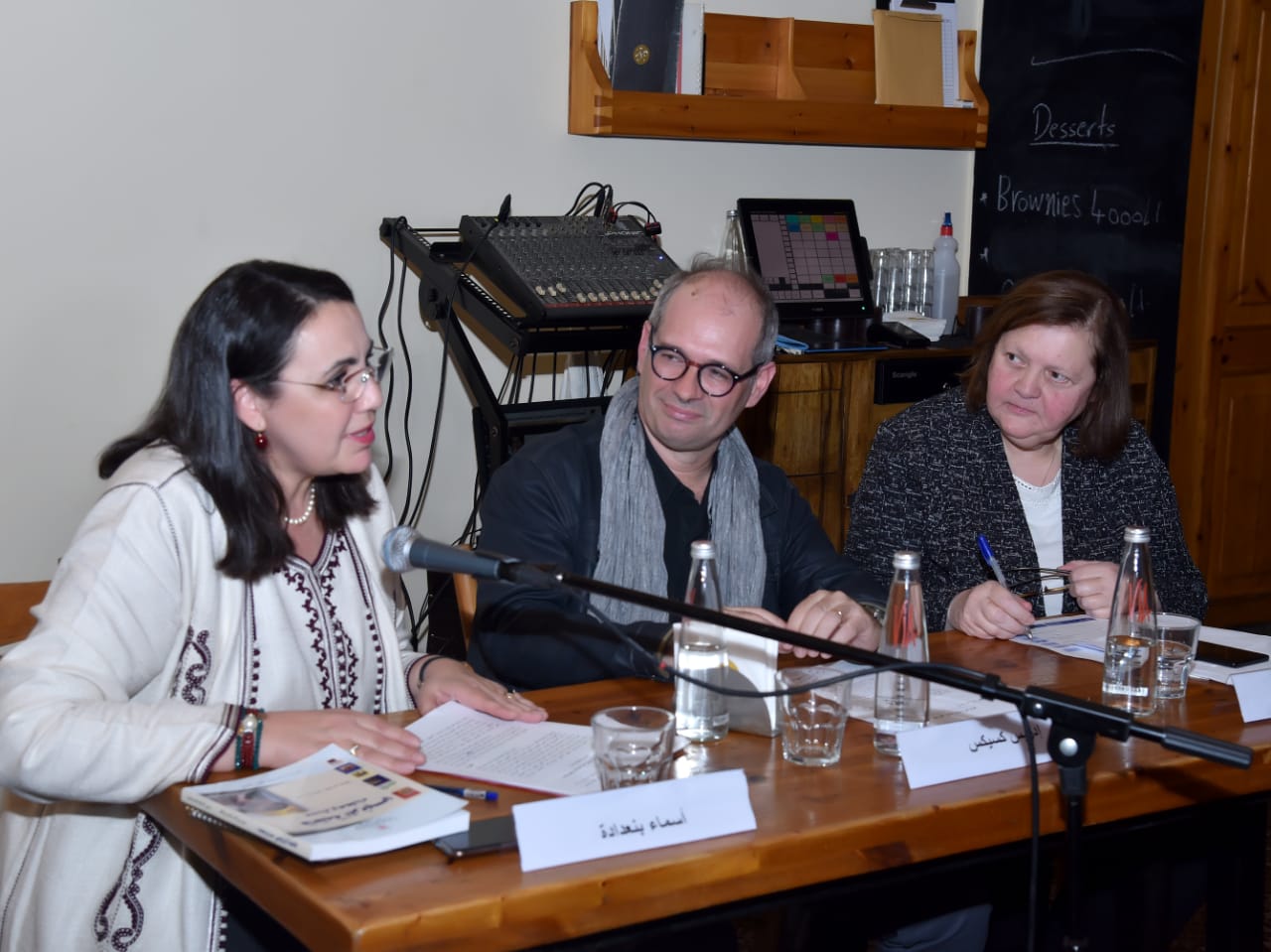 Beirut, November 29,2019- The Arab Council for Social Sciences (ACSS) organizes an Annual Lecture series to honor prominent social scientists from the Arab Region, to shed light on outstanding legacies of the past, and to inspire a new generation of social science researchers.

On November 28, ACSS inaugurated the Fatema Mernissi Lecture Series in Beirut, coinciding with the anniversary of the passing away of the late Moroccan writer and sociologist.

In her welcome speech, Dr. Seteney Shami, Director General of ACSS said: “These lectures aim to provide continuity to Mernissi’s legacy, thought and approach and to build upon her work.ACSS will organize a lecture to honor Mernissi in a different Arab country every year for four years, thus expanding the geographical reach of her ideas in order to reduce distances between researchers, and open new spaces of dialogue about women, heritage, and rights”.

In his opening remarks, Mr. Driss Ksikes, founder and coordinator of the Fatema Mernissi Chair at the Mohammed V University and Institut des Hautes Etudes de Management (HEM) in Rabat painted a lively picture of Mernissi's unique personality and approach and elaborated on the functions and aims of the Chair named in her honor.

The main lecture was presented by Dr. Asmae Benadada, Professor of Sociology at the Faculty of Arts and Humanities, University of Sidi Mohamed Ben Abdellah, Fez. In her lecture, entitled ‘Fatema Mernissi’s Work: Historical Approach and Field Research’ she discussed the main features of Mernissi’s work and approach, highlighting the audacity and critical thinking that characterized this pioneer feminist and sociologist, who challenged the secrecy and silence surrounding taboo issues in Arab-Islamic culture and helped deconstruct patriarchy in Arab-Islamic culture. Benadada concluded with a mention of the research Mernissi  had been  developing on how the digital revolution and social networking sites were affecting media and religious discourse, a project that did not see the light because she passed away before its completion.

In her intervention Deema Kaedbey, coordinator of one of the ACSS working groups explained that: “The Critiques of Power working group at ACSS is reading Fatima Mernissi, looking at how her unique interdisciplinary approach reinterpreted historical narratives and current practices through a focus on sexuality and marriage”. Kaedbey also emphasized that Mernissi's approach is a reminder of the importance of feminist re-readings of archives.

The ACSS Annual Lecture seriesinvites scholars to present on intellectual traditions in the region. The Lecture series changes focus and theme every four years. The first series (2015-2019) commemorated the work of the late historian Hanna Batatu.

The Arab Council for Social Sciences (ACSS) is a regional, independent, non-profit organization dedicated to strengthening social science research and knowledge production in the 22 countries of the Arab region and the diaspora. By supporting researchers and academic/research institutions, the ACSS aims to contribute to the creation, dissemination, validation and utilization of social science research, and to enhance the role of social science in Arab public life and inform public policy in the region. The four main principles guiding the ACSS are quality, inclusivity, flexibility, and independence. Its programs include grants, fellowships, conferences, research forums, training workshops and publications.  The ACSS is based in Beirut, Lebanon. www.theacss.org

Sociologist and Feminist Activist: A Lifetime in a Few Lines

Fatema Mernissi was an extraordinary woman. Having spent more than half her life writing and analyzing Islam and womenas well as fighting for gender equality, it should come as no surprise that Mernissi was included in The Guardian’s 2011 global list of “Top 100 Women: Activists and Campaigners.”

Fatema Mernissi was born in Fez, Morocco, in 1940. She was a writer, sociologist, and feminist activist whose books reached a broad regional and international audience and were translated to many languages.Mernissi studied political science at Sorbonne University in France before moving to Brandeis University in the United States where she received her doctorate in sociology in 1973 after completing her dissertation, Beyond the Veil: Sex as Social Engineering. In the 1980s she became a lecturer at the Mohammed V University in Rabat.

Mernissi was a prolific writer, publishing books that received international acclaim, including Islam and Democracy: Fear of the Modern World; The Veil and the Male Elite; A Feminist Interpretation of Islam; Scheherazade Goes West: Different Cultures, Different Harems; Dreams of Trespass: Tales of a Harem Girlhood, etc.

In addition to her academic work, Mernissi was known for her activism for women’s rights. She conducted interviews in the late 1970s and 1980s to map prevailing attitudes towards women and work. She did sociological research for UNESCO and the ILO.Mernissi published a number of articles and papers that had major impact within and beyond her homeland, in the Arab region and the whole world. However, this success was preceded by a ban on her writings in some Arab countries due to her progressive ideas and the audacity of her discourses. This ban led her to publish her first book Woman in the Muslim Unconscious (1982) in France under the pseudonym “Fatna Ait El Sabbah.”  The ban was eventually lifted and she was able to publish under her real name. She wrote The Veil and the Male Elite: A Feminist Interpretation of Islam, which was received with both praise and criticism. She also contributed an entry titled The Merchant's Daughter and the Son of the Sultan to the book Sisterhood Is Global: The International Women's Movement Anthology (1984), edited by Robin Morgan.

In his article “Fatema Mernissi… The wings of women’s ‘reality’ with which she flew to the dream”, the journalist Karim El Hani said “Fatema Mernissi is a Moroccan woman who dedicated her life to sociology and women’s rights. She weaved together her understanding of reality and tradition to demonstrate how patriarchy limits women’s effective engagement in Arab and Muslim societies.” (Marayana 5 September 2019)

Mernissi received a number of international honors and awards, most notably the Prince of Asturias Award for Literature in 2003, and the Dutch Erasmus Prize which was awarded at a conference organized in 2004 under the theme of “Religion and Modernity.” In 2015, after her death, a new Chair at the Mohammed V University in Rabat was named after her.

Fatema Mernissi passed away on November 30, 2015, leaving behind a great legacy and a greater intellectual wealth, which would immortalize her as one of the eminent thinkers and writers of the Maghreb and the Arab region.